Located on a hill, the village of Poilhes is crossed by the Canal du Midi and overlooks the ponds at Capestang.

Poilhes is not far from the oppidum of Ensérune.
The Canal du Midi, classified in 1996 as World Heritage of Humanity by UNESCO.

Two English cannons placed on blocks of stone on the bank of the Canal du Midi; these guns were found by an amateur diver off the coast of Agde, then kept for a few years in a freshwater basin to finally be given to the town.
Via Domitia, vestiges of the Roman road are still visible in the eastern part of the municipal territory, towards the hamlet of Viala (D37E5).
The Régismont estate, around this working wine estate, many vestiges of the Roman presence have been brought to light. The site was classified as a historical monument in 1937 and you can see many sarcophagi dating from the beginning of our era as well as Aurignacian remains. Around the 4th century, a first Christian church was built on the present site of the estate but was destroyed around the 15th century.

The church of Saint-Martin de Poilhes, is part of the parish of Notre-Dame-Des-Étangs.

A war memorial is built in homage to the victims of the First World War.

In the centre of Poilhes is what remains of an elm planted in the time of Sully (a minister of Henri IV) as well as two ancient English canons, which stand on the bank of the canal.

These were found on the sea bed off the coast at Agde in the 1970s, but their origin is unknown. It is thought that they were seized from the English army after the Revolution during a siege against Toulon, siege in which a certain Bonaparte is said to have taken part…

But it is more likely that the canons were obsolete and thrown overboard from a British ship crossing the Mediterranean. Archeologists have discovered numerous relics in and around Pöilhes.

One of the largest open-air camps dating from the Aurignacian period was discovered in the commune. Unfortunately the site is not open to the public but reserved for research; however it can be visited at certain times. Nearby is the hill of Ensérune with its famous oppidum and close by the Via Domitia, a famous Roman road built while the Romans were conquering the South of Gaule. 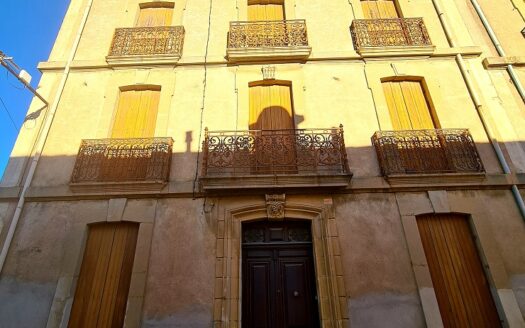 Great potential and charm for this bourgeois...

Pretty and renovated village house with a te...

You can find out more about which cookies we are using or switch them off in settings.

This website uses cookies so that we can provide you with the best user experience possible. Cookie information is stored in your browser and performs functions such as recognising you when you return to our website and helping our team to understand which sections of the website you find most interesting and useful.

Strictly Necessary Cookie should be enabled at all times so that we can save your preferences for cookie settings.

If you disable this cookie, we will not be able to save your preferences. This means that every time you visit this website you will need to enable or disable cookies again.

This website uses Google Analytics to collect anonymous information such as the number of visitors to the site, and the most popular pages.

Please enable Strictly Necessary Cookies first so that we can save your preferences!